We have happy clients

Coast Mountain Gutters has provided excellent customer service to our company. They have gone above and beyond regular warranty repairs to ensure our homeowners are happy with their homes. They are friendly to deal with and provide updates from start to finish. I appreciate anyone that can make my job easier and Coast Mountain Gutters does just that.

“.. Their level of service is unprecedented ..”

Portrait Homes has been associated with Coast Mountain Gutters for close to two decades now; our relationship has spanned several award winning projects including our latest master planned community ?The Crest? at Silver Ridge located in Maple Ridge.

The employees when on site are professional, courteous and always meet our scheduling requirements.

Portrait Homes are currently employing the services of Coast Mountain and plan to continue that relationship forward to any of our future projects.

Their level of service is unprecedented, and their commitment to doing quality work is refreshing. We would highly recommend them without reservation.

“.. would not hesitate in recommending ..”

Holly Lane Estates is a 55+, self managed complex built in 1989, it was time to replace our gutters to enhance our new roofs.

The building maintenance director approached five different companies for quotes to do the replacement of gutters to our specifications. Coast Mountain Gutters was not the highest, or lowest, quote but suited the needs of Holly Lane Estates.

The work was carried out in a very timely manner, with the least disruption to the owners. Holly Lane Estates Strata Counsel would not hesitate in recommending Coast Mountain Gutters.

More Kind Words from Our Clients

Thankyou so much for the work that was done at our house. The fellow who did this was so quick and efficient. Could not have asked for a better job. We realize the job was small and no one was interested in doing it because of not enough profit. You not only did the job, but at no profit. I have posted this kind act on our social media accounts and gave a rave review on Google.

We just wanted to say thank you so much for your exceptional customer service and workmanship when completing our project. Its refreshing to see a company that is prompt, professional and courteous. We will definitely recommend you to our family, friends and neighbors. 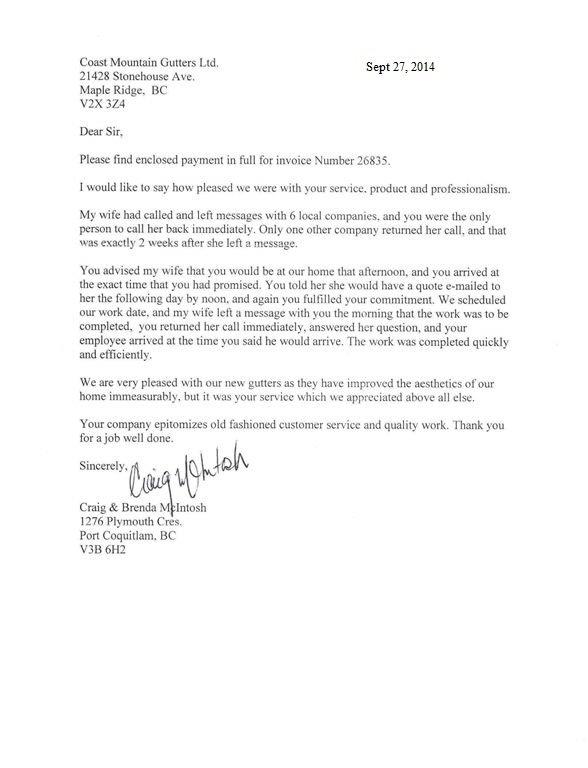 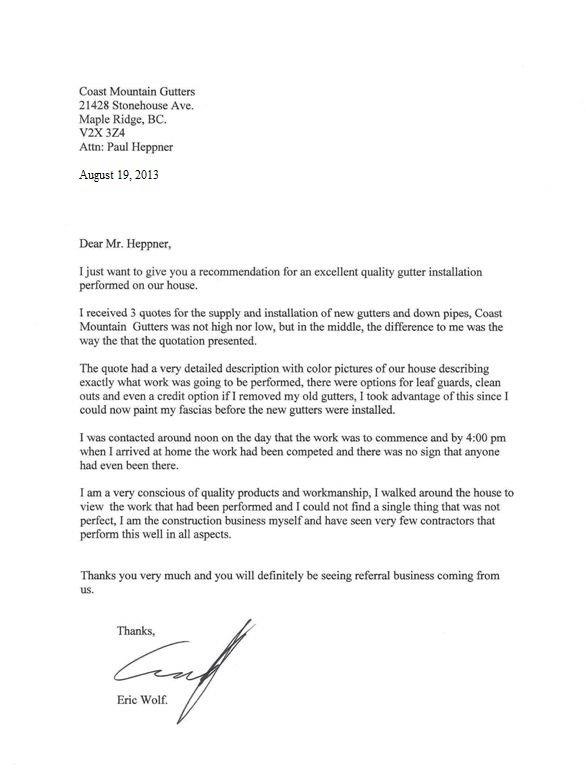 concerns over the initial gutter replacement job on our home.

I am writing to let you know about the fantastic service we recently received from Coast Mountain Gutters Ltd.

Unexpectedly, the soffetts on the north side of our house collapsed and fell to the ground.? We called a couple of companies to give us a quote to repair the gutter and soffetts and co-incidentally one the of the companies we called was Coast Mountain Gutters.? Kirk showed up to give us a quote and informed?us that they were the company that had originally installed the gutters and he said he would send a crew to fix it, no charge.? Once the repairs were completed, we were amazed as it?looked as though the whole length of the house?had been replaced, it looked like new. I called them back to thank them and was told that it was not a simple fix as first thought, that someone would be in touch but I was not given any details.

Two weeks later Paul from West Coast Gutters stopped by to fill me in on what work had been done?to repair the gutter. I was shown pictures that were taken?and it was obvious that it was not a result of a poor installation job but rather the?result of the trusses not being in line with each other. The?valance that is nailed to the end of the truss could not be nailed properly because the truss was too short or not lined up. The nails were not very effective and over time the board had started to separate from the house, causing the gutter to bow and leak and eventually the soffetts fell out.?? In spite of this, Paul and his crew still went ahead and did the required repairs to correct the problem, no charge.?

My wife and I were very grateful and thought it important to let you know of the great service they provided. It’s rare in this day and age that a Company would follow through with their agreement to not charge us even though the work turned out to be much more labour intensive than was first anticipated and really, they were under no obligation at any point to do this work for free.

We?have made it a point to let our neighbours know about the great service we received from?Coast Mountain Gutters and will continue to recommend them whenever possible.

We are waiting for your call